AERC is the best system for measuring the raw statistics of your deck. There are currently 6 different measurements that factor into an AERC rating:

AERC does a good job of getting a relative benchmark strength for your deck, but it is by no means an infallible system. Each rating is based off an opinion on a card, which will inevitably lead to inconsistencies and ratings that are impossible to standardize for each deck.

The problem with AERC lies in the fact that /u/coraythan on reddit took the time to log each value, adding the inherent bias of the creator. In Keyforge it is very hard to create a power measurement for cards because each deck is so unique. This means that in one deck a Miasma may be just a raw aember with some delay potential, but in another deck with 2x Doorstep to Heaven it may be worth much more in terms of setting up aember control.

This deck does have Miasma but it’s nowhere to be found on the aember control section of the AERC breakdown, even though it can set up extremely strong aember control turns with Too Much to Protect

Another factor that makes AERC hard to measure is that there is never a meta where everyone is playing with exactly the same deck. Almost every single card in the game has some niche use, so in some matchups your Take that, Smartypants will be worth simply an aember and in other matchups it will be gamebreaking. Unless FFG seriously messes up, targeted hate cards like Take that, Smartypants will be very hit or miss, polarizing the ratings on the card and the AERC of the deck.

Let’s take a look at B. Holt, Scudiera di Lucebrillante, one of the top rated decks listed on decksofkeyforge.com 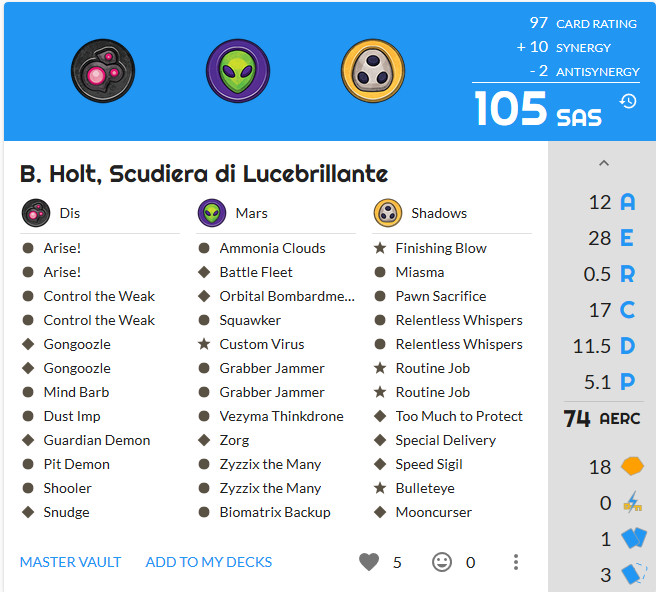 This deck has a completely nuts AERC score of 74, with the bulk the AERC coming from the expected aember, aember control and deck manipulation. A pretty bonkers deck, as far as the AERC goes, but it runs into some of the problems I outlined earlier.

AERC also gives Pit Demon a 1 for aember control and Shooler a 0.5. That may be accurate for more board heavy decks, but in this deck I would argue that because of the low number of creatures and the weak creature power values Shooler will be stealing an aember more consistently than Pit Demon.

AERC is a great tool and it is important to know how to use it properly. AERC can be used to great effect for at a glance analysis or when flipping through decksofkeyforge waiting for the bus, but it can also give a false sense of security. It can be easy to just look at the stats for a deck and assume it is strong because it has a high AERC or SAS rating, second guessing any of your other evaluations. Sometimes players get so comfortable with the rating systems that they forgo evaluating the deck themselves at all until they play it at a chainbound event.

Especially when buying decks on the secondary market, please playtest them first and make sure they are what you expect. If you are buying a fun Heart of the Forest deck because you don’t have a deck with the card, it probably won’t matter so much if the deck isn’t great. If you’re dropping $500 for a vault tour level deck because you saw that shiny 68 AERC value, playtest before you buy. The crucible online is a free resource where you can practice any deck even if you don’t own it in person so you might as well use it. The deck you’re buying could have gotten lucky and done well at a vault tour, or it could have been piloted by an amazing player like Dunkoro. That doesn’t necessarily make the deck worth the price tag.