On my bus ride to work, I love to listen to Keyforge podcasts. There are many awesome people producing great content for the Keyforge community, like the Sanctimonius crew, the Help from Future Self pod, the Keyfort pod, and many others, but almost none of them have homogenized ratings for cards or decided-upon lines of play. I love this aspect of the game, and I think this constant discussion and discovery is part of what makes Keyforge fun and interesting, but I want to try and take a slightly more analytical approach to evaluating cards and boardstates in the game of Keyforge.

Coming from a game such as MTG or Pokemon, Keyforge seems relatively easy to grasp. Cards are fluid and easy to replace, and there is no set cost for most actions. There is no concept of “energy” or “mana”, but where Keyforge lacks in explicit costs it makes up for in the hidden costs. With this article, I’ll be starting a series of (hopefully) weekly articles discussing different lines of play, interesting Keyforge cards and how they interact with the game, the system of resources in Keyforge, and other topics on the game coming from the perspective of a former (semi-competitive) TCG player.

In this article I’ll be evaluating Timetraveller, one of the most sought after cards in Keyforge decks. Timetraveller has many different effects, making it difficult to evaluate. Let’s break it down.

When Timetraveller enters play it:

Using an action, Timetraveller can:

Worst case scenario Timetraveller gives you an aember and dies to a poison wave or something. The floor is not too low as there is always that aember pip, so Timetraveller is always going to give you something of a bonus when played and is never going to be a dead card.

Keep in mind, in order to use any of the activated abilities on Timetraveller you must wait approximately 3 turns. If you call whatever house you are holding most of to maximize your board development, then Timetraveller must survive for approximately 2 turns after the turn it was played, and with that measly two power that can be a difficult feat. Luckily, there is always Help from Future Self.

Timetraveller also draws 2 cards when it enters play. This may seem strong on the surface (and when I first started the game drawing two cards seemed amazing, at least coming from MTG), but in reality you only have around a 2/3 chance to hit another Logos card. If you don’t hit another Logos card, the cards you just drew are worth nothing (with a few corner case exceptions like helper bot, phase shift and archiving from your hand) because you would have refilled your hand to 6 at the end of your turn either way. 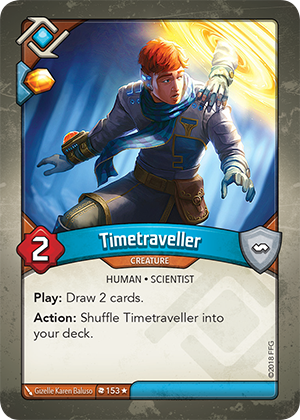 Timetraveller as a card scales depending on the average power of cards in your deck as well as the combo potential in your deck. If you are playing a sealed deck where the average card in your deck is below average, then the cards you draw are probably going to have a smaller impact on the game. If you’re playing a deck that relies on synergy, for example, then maybe the draw effect of Timetraveller will bring you the information you need at a faster time, setting up a stronger combo turn. He also gets stronger the faster you can look through your deck because of his partner card, Help from Future Self, so if you have a bunch of Eyegors in your deck with Timetraveller you can expect to power him out quickly and then also recur him quickly.

Timetraveller is an example of a scaling card, one that gets stronger the longer the game goes on. Early game it is important to develop board and establish control, while late game aember generation becomes more and more important. Timetraveller’s draw effect gives you a higher chance to find your aember generation or aember control later in the game, as the longer the game goes the better most of the silver-bullet type cards in keyforge get. (I am in the middle of writing another article on this, so stay tuned)

Now, Timetraveller on its own would be a decently strong card, but the thing that really pushes it over the top is the card that accompanies it: Help from Future Self

This card is absolutely insane. The fact that it gives one aember on top of the aember from the actual Timetraveller card is completely nuts, but the shuffling effect helps balance out the card a bit. Shuffling your discard pile back into your deck is usually a negative in Keyforge because with a smaller deck it is much easier to predict what your next potential draws are and sculpt your plays around the cards left in your deck, even though this effect only really takes away from the card’s strength at high levels of play. The best part about this card, though, is the fact that it effectively duplicates a very strong card in your deck, giving your deck that much sought-after consistency that can be missing in a game like Keyforge compared to another deckbuilding TCG. Essentially doubling up on this very strong Timetraveller card gives your Logos house less space to roll that sweet, sweet 5th Binate Rupture

Overall, Timetraveller is an awesome card to play and is incredibly flavorful, being a satisfying card to play without being too strong. Having a Timetraveller in your deck makes it more consistent and faster without feeling monotonous or boring when you play the card. Fantasy Flight Games totally nailed that balance of consistency and randomness, creating one of the best cards Keyforge.